While she dislikes conflict, her "gentle realism" always makes her seek the truth in every situation, no matter how painful or inconvenient it may be. A sensitive girl who loves seeing and making others happy; fastidious and a bit fussy.

Though her heart is in the right place, she cracks under pressure and is not much different from an average citizen that needs protection.

Veronica exudes a sort of soft weakness; she's slim, of average height, lacks a defined musculature, physically weak, and is more curves than corners. She typically has a carefully groomed and collected appearance--clean, trimmed nails, a headband keeping her airy hair in place, etc.

Her civilian clothes tend to be "comfortably classy" and are generally more muted colors. She's very rarely seen without her oval sunglasses on or in hand to filter out what she sees from Divine Sight. When in her (rarely used) superhero outfit, she wears a metal eye-covering with a runic engraving instead of her sunglasses.

Veronica is a pacifist and usually seeks for compromise; she dislikes violence, particularly unnecessary violence. She is a "gentle realist," giving what she thinks is the truth in as sincere and inoffensive a manner as possible and typically takes the neutral role in an argument. Veronica likes making others happy and always wants the best for those she loves. She can be a bit fussy and needs time to consider any plans of action.

Veronica is a big believer in "the little things" and works to make others comfortable. She is particularly observant of other people and happily helps those in need.

Due to her fastidious nature, Veronica is unable to focus on bigger pictures; she overanalyzes and dwells on past events. She cracks under pressure because of her "realistic self doubt" and is a poor improviser, freezing in crucial moments. Her emotional attachments often hinder her decision-making.

Veronica despises lies, half-truths, and twisted words. She also tends to cook when stressed, though the results may or may not be hazardous for human consumption depending on the ingredients on hand. She enjoys the kids' show Mr. Sunlion & Friends.

Veronica wants all those she loves to stay safe, happy, healthy, and pleasantly grounded in realism. She does not have any particular dream or plan for herself.

Veronica is terrified of any situation out of her control: murder, kidnapping, robbery, blackmail, natural disasters, losing her sunglasses, loved ones being in danger or poor health, really fast big bugs that lurk around dark corners, etc. Her brain tends to shut down in times of stress and she ends up making horrible, desperate decisions.

Veronica's generally oblivious; in her mind, why would someone want her when there are better people out there? She's probably straight, but she hasn't really thought about it.

A classmate once asked her politely to prom. Other than that, none.

Aletheia's superpower is magic-based and has primarily to do with what her eyes see and what life energy she can manipulate. As she hasn't had training or any guidance from superheroes, villains, or scientists, she is uncertain of her limitations and powers.

Aletheia can See what is "Wrong" for as far as her natural sight can see. "Rightness" is dull, muted, and natural, while "Wrongness" lights in a sort of malignant glow. This can apply to things like diseases, broken bones, ruptured organs, mental traumas, wickedness (aura), or ambushes.

PROS:
Spot hidden criminals from safe distances, figure out a diagnosis for someone's pain, sense traps, discern untruths even if the person believes them to be true

CONS:
Using her Sight on crowds of people is terribly overwhelming—there is little worse than knowing every single person's "Wrongness." If she Sees for extended or intense amounts of time, she gets lasting migraines. The Sight of large amounts of "Wrongness" makes her physically ill. As such, Aletheia both fears and loathes seeing the world without her sunglasses on since they dull everything her brain receives into a seamless, pleasant monotony.

Aletheia can Purify lasting "Wrongness" she sees through Divine Sight. The more serious the "Wrong," the more energy it takes to completely "Right" it. She needs to have physical contact with her subject, preferably with her hands; the closer to the location of the "Wrong" the easier it is to form a connection and manipulate energy.

PROS:
A fairly convenient cure for practically any ailment or injury.

CONS:
Dissipating "Wrongness" takes a substantial amount of energy, time, and concentration; both she and the subject are incredibly vulnerable during Purification as she needs to manipulate her own life energy to coax and probe at the subject's. If she Sees too much "Wrongness" it can be difficult for her to precisely locate and visualize what she wants to Purify. She can't remove evanescent "Wrongs" like lies.

When Veronica's stressed, watch out--she'll create increasingly bizarre creations as she runs out of key ingredients, and then she'll make you eat them, too, because she's running out of dishes to stress cook on.

CONS:
Expect a mountain of dirty dishes, messy kitchens, and upset stomachs stuffed to bloating. Her main victim is often her younger brother.

Aletheia is entirely useless in battle at this point. Even a sub-par villain could get the jump on her; her reflexes and physical/mental strength are that of an untrained, average human girl who isn't keen on working out.

She's generally the one others come to after a particularly grueling mission or if they have injuries they want to be rid of in a rush. She's also practiced at resolving others' conflicts.

She's more of a battlefield liability than anything else, an extra person one has to delicately protect and keep safe. If she's put into a compromising situation, she'll inevitably freeze and either give up or make horrible decisions.

Central City, home of the Flash, is both bustling and safe enough to provide a stable employment opportunity for her parents. Criminals don't seem to target this city like they target other well known "superhero towns" so it is a relatively easy life.

Aletheia's Sight began to flicker in towards the latter of her childhood. She has intense memories of her eyes hurting so much that they would swell shut because she was constantly crying. When her parents realized that this was certainly more than an extended temper tantrum, they took her to see countless doctors. The professionals finally decided on "sensitivity to light" and scaled the condition to the infrequent villains messing with...everything. There were no reports of any other similar cases in Central City, but since the prescribed sunglasses seemed to work fine, nothing more was spoken about Veronica Raptis' abnormality.

Purification, though, is harder to pin down since Veronica had such a brief exposure to a fully functioning Divine Sight. Veronica's direct family, little cousins, and classmates always feel better after a hug from her, though. She has never told anyone of what she suspects her powers may be.

Veronica has since been living peacefully in Central City and, after a tentative stage, occasionally helps out at the SGPA headquarters. 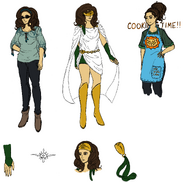 Veronica distributed these cards on Valentine's Day to every member of the SGPA.
Community content is available under CC-BY-SA unless otherwise noted.
Advertisement