Seiren's a tall, dark, and handsome (well, more "beautiful" than handsome) man! Haha. His skin is almost pure black (but for artistic purposes so you can see the outlines, it's dark grey), and he has red markings on the outer bottom corners of his eyes (it's part of his skin pigmentation). He's athletic, but a bit slim in build.

He's a bit on the flamboyant side, as he loves dressing in pretty things. Unfortunately for close-minded people, that usually means "female" clothing. He's from the ocean though, so what does he care what land-lubbers think? He's not against showing off skin or the form of his body, so please don't tempt him to. xD

Seiren as a civilian likes tying up his hair in a long ponytail. Dressed up right, he looks a lot like a beautiful female model, so lots of people get fooled by that. On the other hand, he can also look like a demon monster thing, being that he's almost pitch black, has red eye markings, and is constantly trying to tempt people.

Flippant, flamboyant, flirty, and has a sense of humour. Doesn't care much for critics, and brushes off insults easily. Is very quiet since he doesn't speak, but you wouldn't know it since he telepathically communicates whether you like it or not! He considers himself a lover, not a fighter. Supports people if their intentions are good and true. He loves cute and beautiful things and people.

artistic, intelligent, self-confident, encouraging, responsible (though comes off as irresponsible), has good intentions

flirts without warning or caring about the target, follows authority's rules without questioning them, manipulative, intrusive with telepathic communication, a liar, easily betrays team/no loyalty!, comes off as royally stupid despite his actual "intelligence", will generally not interfere to save human populations during oceanic natural disasters like tsunamis and storms

likes collecting junk (usually to make collages or mosaics out of them later), ends up in a state of undress all the time, has a hard time saying "no" to a source of cutenessS

the ocean drying up, hurting a sweet innocent girl or guy, getting burned

A great many... Too many to even name!

Magic-based abilities that usually have to do with water or telepathy and telekinesis. It's species-based.

This is how he communicates. He is too lazy to learn sign language, and as far as we know, he has no vocal cords. I am not even sure he can read, actually!

PROS:
communicate directly with allies over vast distances without needing to shout

CONS:
intrusive, unencrypted (other psychics can tap in and eavesdrop), sometimes no one wants to hear what he has to say but he says it anyway--like psychic spamming! It's not like Miss Martian's telepathic skills where she can link up people telepathically, mind read into people's hidden thoughts, and other advanced skills like that.

His true form is that of a huge black fish, so he's already constantly in a shifted state on land. He can also shapeshift into pretty much any sentient being he has come into prolonged contact with. Depending on his familiarity with the species, he can shift into its form and gain basic species-based abilities (like a human has fingers and legs instead of fins).

PROS:
can better blend in with the species, gain species-based abilities like having more legs, or horns, or opposable thumbs. Can turn into almost any sea creature well, good with other water-based creatures, practicing with humans.

CONS:
always retains basic characteristics and stats of his own species mixed in with the shift (black skin/scales/hair, red markings), unfamiliar species are hard to shift into or leads to clumsiness and a steep learning curve. Not much success with cows, birds, cats, and other non-aquatic things yet.

He can turn those that he successfully seduces and recruits into White Seiren, an ocean spirit species that lives to serve the ocean (keeping the ecosystem in check and all that). White Seiren are like Black Seiren, except they can't perform Seiren-Turning.

CONS:
does anyone REALLY want to become an ocean spirit/slave? Seiren generally tricks people into this, and once a agreement is made and the person is in the water, the process starts taking place right away (thus the whole flirtation and seduction thing suddenly makes sense!)

Can telekinetically control large bodies of water. The larger the body of water, the more energy he can generate.

PROS:
Can generate devastating currents, whirlpools, water cyclones, and typhoons. Most powerful when he's in the ocean or sea.

CONS:
Can't do much with small bodies of water. For example, he can't make a water whip or water hammer like AquaLad can. Size of body of water must be at least a swimming pool to do something significant, otherwise, it's useless splashes.

he is strong, fast, agile, and intelligent, and fights like a dancer since it's similar to swimming in terms of flowing to the rhythm of the battle. He'd rather not fight unless it's in self-defense though.

if he believes the enemy has good underlying intentions doing whatever they are doing, he is prone to switching sides on the fly! It easily becomes a battle of intentions and you have to convince him who to fight for (think of a school of fish swimming back and forth hopelessly--kind of looks like a panic mode).

Seiren is an ocean spirit that lives to serve the ocean and its masters (like AquaMan, King of Atlantis!). The oceans of the world probably have many many governing authority figures, and he may well serve them all given the right circumstances. He is charged with taking care of the ocean and recruiting more ocean spirits. Sometimes that means convincing or seducing other species to join him, which is where some tales of Sirens calling to sailors to shipwreck themselves comes from.

Seiren developed a new idea to recruit suitable spirits from land, hearing how Aqualad and Aquaman went to the shores and joined a league of very powerful people. Who better to recruit from than awesome heroes?! He swam along the shores where all the young people gathered and began his recruiting mission.

After a year or so, he stumbled upon Happy Harbor and found Solar Cat and Dysta hanging around. After the initial shock and him trying to recruit them, they instead recruited him into the Super Princess Galaxy Alliance. He couldn't say no to a pair of cute young ladies that were so intent in growing their super hero team. And thus, he committed to helping them (also with the intention of meeting other heroes and recruiting them).

What a surprise that he bumped into Aqualad along the way!

The Black Seiren as an ocean spirit

Seiren being pretty in front of a mosaic 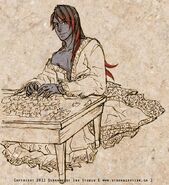