Zeke has a Muscular body and a slim waist

She decides to trust someone or not upon studying them it she think they can be trusted she will at friendly towards people. She does not like talking having spent most of her life being encouraged not too.

Bad Traits: trust issues, hostile towards those she dislikes.

Quirks: Put's on helmet so she doesn't have to listen to talking.

Zeke hopes to be normal. (but what hope does she really have of that)

loss of loved ones, being taken back by the light, claustrophobic (which is funny cause I shoved her in a suit)

"I don't want to kill them I want to make them suffer!" "I'm a girl!" sticks out chest "Is it really that hard to tell." "They put chip in my head makes me do what they want, but not anymore I pulled it out." "Please I've had little girls hit me harder than that!"

Get's along relatively well with all members of Young Justice except Megan (she talks to much!), Burn (there best buddies), Shadow Leaper

The light, league of shadows, badguys in general, Loud people.

Current: Has a small crush on Robin

Zeke's main ability is Telekinesis, however over 8 years she has been trained in different Martial arts, weapons and has been surgically inhanced

Surgical Enhancements and suit of Armour

CONS: Suit is bulky and Zeke does not like being in it for long periods of time as she is claustrophobic

PROS: Can move objects that are outside of her physical range.

CONS: Power's are underdeveloped and require working on for this to affective.

Her fists and legs, any objects she can find, two Escrima Sticks

Skilled at Martial Arts takes on enemies in hand to hand combat but has light amount of skill with swords and other weapons.

Zeke is strong and agile (though this is restricted by the suit). She also has great tactical thinking

Outside of suit is vulnerable to things normal humans are unless she can fight them off, eyes are extra sensitive to light.

Born and raised in Australia until at age 5 her parents were killed by the Light in a successful attempt to kidnap her. Zeke was one of twenty-six children kidnapped for the project they were trained in tactical thinking and martial arts at age 9 the subjects were surgically enhanced but unfortunately most of the subjects died leaving 2 who were damaged physically and were unable to do basic things they were in constant pain one died pulmonary embolism and the other died of morphine overdose. Zeke survived and functioned wonderfully with the implants but after the other's death she would not co-operate with her captors and had to have a chip installed in her head to make her comply after it was found G-Gnome's had no affect on her, and be a assassin. At age 13 a job brought her in contact with Young Justice during the conflict the chip temporally shorted out she than quickly ripped it out of the back of her head. 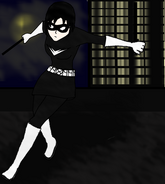 Add a photo to this gallery
Retrieved from "https://sgpa.fandom.com/wiki/Xile?oldid=6550"
Community content is available under CC-BY-SA unless otherwise noted.