Zapps is a small girl. Not only is she slim but she is also on the short side. Because of this she tries to carry herself in a way that people will notice her. Around those that know about her powers she'll float up to eye level if they are much taller then her when she's talking to them.

Though she does like girlier things, she acts more like a tomboy in that she isn't scared to get dirty. She also has a bad habit of not being able to stand/sit still.

She comes off as a total ditz and very hyper. Most people, when first meeting her, think she a bit off and possibly has A.D.H.D. She has a problem with not knowing when to stop talking and is known to say some pretty weird things sometimes.

Good Traits: She will never give up on something she believes in, she is always there for her friends and those she cares for, she sees almost everything as the glass half full, she's kindhearted, very easy going, very friendly to pretty much everyone, always willing to learn, creative

Bad Traits: She can get on people's nerves pretty quickly though she doesn't mean too, she can be gullible, she loves to pull pranks on others, she can be a bit full of herself, she's stubborn, doesn't know when to stop talking, jumps into things without thinking, very childish

Quirks: She lives by what she believes to be the 'rules' to being a true superhero and she has a fascination with 'weird' or 'unusual' things, such as Bigfoot, ghosts, etc.

Huge fear of being abandoned or replaced, fear of bugs

Sibling(s): Victor Stone[Adopted Brother], No real brothers or sisters are known of

Though she doesn't hate her, Maddie doesn't really get along with Artemis, Strike, and Ghost

Zapps has never really had a boyfriend or been on a date so she doesn't really know much about these kinds of things. This makes it hard for her to know the difference between feelings for a friend and those of love. It also makes her clueless to her feelings for Robin though it is pretty obvious to others.

She has the ability to control electricity and magnetism


PROS: She uses her power over electricity as her main means of fighting.


CONS: She is weak against water and she can harm herself with her powers.


PROS: She can use it to fly and to pick up objects.


CONS: Her ability to control this power is very weak and can drain her pretty quickly if she isn't careful. She can't fly for long periods of time or lift up a object if it's to heavy.

She's known to jump into a fight without thinking things through first. She also isn't much of a hand to hand fighter as she was never trained in such things.

Her powers are at their best when teamed up with someone else and no matter the situation or the enemy she never gives up.

She isn't a strong fighter on her own and if put in a one on one fight, she'd probably lose.

Maddie was adopted by Silas and Elinore Stone at a young age after hearing of the girl's abilities. They wanted to learn more about these mutations in humans and how they came about gaining these powers. Being so young she never really questioned it. She even wondered why Victor was so against what they were doing to them.

Maddie wasn't put through the same intelligence enhancement experiments as Victor but her parents still made sure she was well educated. Through her studies she found a love in computer programing. Victor helped her learn all she could and over the years she became almost as good as the pros. She also found fun in hacking. Something she hid from her parents.

Another thing Maddie fell in love with was the dream of one day becoming like the superheros she saw on TV. She'd study how they dressed, how they acted. Anything she could. Because of this, she came to believe there were set rules to being a real superhero.

When she heard about the creation of the Young Justice team she thought it was her chance to finally become a full-fledged superhero. Going to the one place she thought would be her best bet to find one of the Justice League members, she waited outside of the Hall of Justice. After not getting the answer she wanted, she went out to prove to them she was Young Justice material. She ends up getting in some trouble and has to be saved by Robin. He takes her to Mont. Justice when he saw the condition she was in and there Batman explains to them all who she was. When she comes to she tries to talk the team into letting her join. It wasn't until Aqualad saw the determination in her to not only join but to learn that he spoke in her defense. Batman made sure he understood she would need training and that he would leave it to Aqualad to determine when she would be aloud to actually go on missions with them. 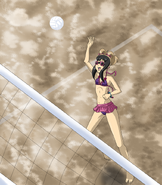 Add a photo to this gallery
Retrieved from "https://sgpa.fandom.com/wiki/Zapps?oldid=6543"
Community content is available under CC-BY-SA unless otherwise noted.